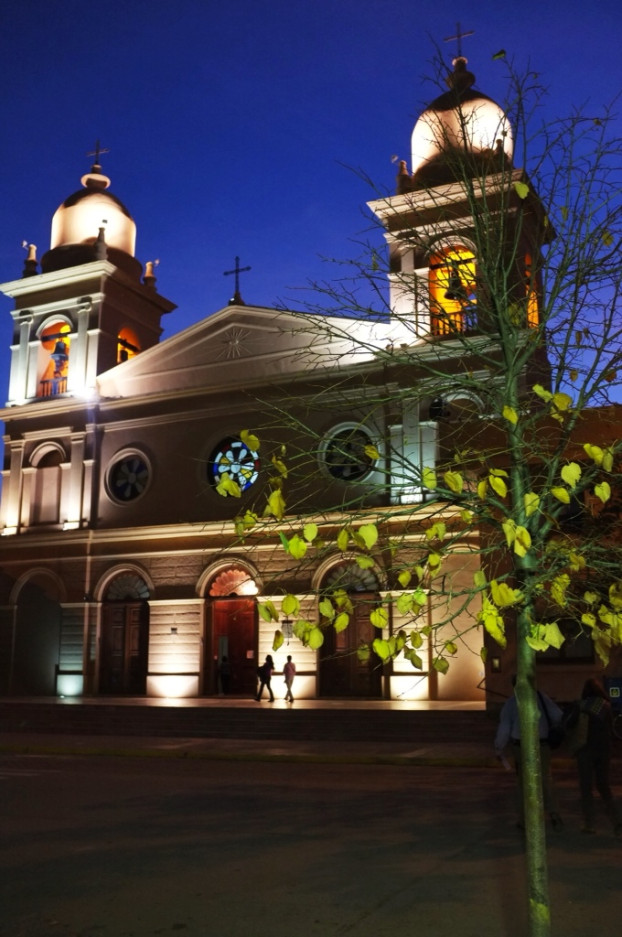 The church in Cafayate on our last night

Out first attempt at hitch hiking in Argentina proved to be very successful! At one point we thought we would have to sell a vital organ to afford the rip off prices the taxi services (actually local men with 4x4s) were trying to charge us to get from Angostaco to Molinos (from where we could then catch the bus to Cachi). I suppose they have a captive market given there is no public transport for that route. Just when we managed to bargain a reasonable price the driver showed us he had a flat tyre and told us he would be back in fifteen minutes from the Gomeria. An hour and a half later we strapped on our packs and were about to start the 1 kilometre dusty walk back to the main road.

The call “Gringoes!” went out as we saw a car drive past us into town and we started running towards the road to catch it on its way back from the plaza. The thumb went up and thankfully they pulled over. We asked them in Spanish where they were going ( not sure why as they were clearly foreigners) and they asked back in a very Australian accent if we spoke English. It turned out they were from Perth. Kelly and Alan, a gorgeous young couple gave us a lift all the way to Cachi. We were so happy to have the lift we took to them to dinner to say thank you!

The streets of Cachi at dusk

The church in Cachi

From Salta we took a day tour following the train to the clouds to San Antonio and then on to Salinas Grandes, finally ending in Pumamarca.

Nick captured this beautiful lady who was selling knitted products outside of the church in San Antonio.

What is it with us and flat tyres? That makes number three for the trip!

On the way down to Pumamarca

Hill of seven colours in Pumamarca

A man with a van full of pan!
Tilcara

View from the cactus fort

We visited the museum in Salta where these three mummies are kept. The boy was on display when we were there